Fall is here! Clean out that fridge and freezer!

Well. Just six weeks ago my husband and I moved from one side of the country (east) to the southwest again. Now that the move is over fro...

As I look over the month's accomplishments, I am a bit tickled at the fact that I seem to be running in place ever so slowly. I have not kept to my physical cardio workout regime (but have kept up my yoga practice thankfully) and the "other" Sharon has appeared from time to time. So in the month of Feburary I must re-establish that cardio regime!

I have been suffering allergies (dreaded juniper) and started cooking up a storm lately. Now that I am home, I have been working on a perfected chicken recipe which I will share with you now as I have made this recipe over many times playing with the herbs, but I always come back to this one mixture of herbs.

Crank the oven to 400 degrees.

Butter a baking dish, slice the onion and lay down a bed of finely sliced onions in the baking dish. Sprinkle the onions with salt and pepper.

Wash and dry the chicken, season it with salt and pepper completely. Lay it down on the bed of onions. Add 1 spring of washed sage to the cavity of the chicken.

Put the chicken in the oven and turn heat down after 15 minutes to 325 degrees and bake it for 1 hour and 30 minutes total (up to - 2 hours depending on the size of the chicken). Use a temperature gauge to ensure the chicken temperature reaches 160 - 170 degrees. Remove from oven, tent it and and allow the juices to re-distribute - wait for 15 minutes before cutting. Then slice and serve with fresh mixed greens, whole grain fresh baked bread and cheese with broccoli.

Serves 4 people.
Posted by Unknown at 10:55 PM No comments: Links to this post

My husband and I rescued a rat terrier dog this month.

We are in the process of nursing her back to health and giving her a life.

I have seen, read and heard so many senseless ways people rid themselves of dogs. I learned this all while looking for a dog to give a good home. When we drove to pick up Lily, we found a dog who was neglected. She had been crated for too long (we think), she was wheezing, dirty, smelly, living in a crate in the shelter and was trembling. She was afraid of the other dogs in the shelter. We decided we wanted her before we met her, so we also brought "Rocky" our min. Rat Terrier to meet her and they hit it, or so it seemed.  As we were leaving the shelter, in a room on the right, we saw a bundle of fur, several newborn puppies bundled in a basket, all sleeping piled over each other sleeping in a warm room. The owner of the shelter told us they found the puppies the night before, the pups had been left out in the cold. They had been in water and it was cold outside, time would tell if they were to survive. They were bundles of fur. How could someone do that to puppies? Too bad we could only take one dog (Lily) home.

The shelter had Lily checked out once we contacted them via email that we wanted her, we paid Lily's fees, picked up her antibiotics, and we took Lily and immediately. We bought her food, water, a sweater, a harness and let her sleep for awhile in our hotel room. We began the process of (my husband and I) trying to get her to bond with us. I gave her a bath later that night, fed her. Lily is now resting in bed with my husband. Rocky is sitting with me as I update the blog.

Lily is a cute 9 lb rat terrier dog who seriously should weigh a bit more. Thin, long in body, she is timid with strangers. She is learning to get along with this family, she is a gentle dog, sweet and lacking the nurturing which she deserves.

Lily will be "spoiled" rotten, something which is within not only mine but also in my husbands power.
I will post photos of the dog Lily once I have some!

Let's hope our dog Rocky will also really "bond" with her. He is a bit jealous now that she is with us!
Slow introductions help, no forcing of those bonds or they will not hold. 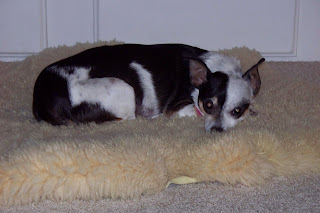 Posted by Unknown at 11:30 PM No comments: Links to this post

Folks I've had a few things happen in the past few days and am on hiatus for a couple of weeks while we sort things out on the family front. My godmother (bless her soul) passed away this past w/e. Aunt Alice taught me to eat healthy.  She was a nurse who worked in the school district of Houston, TX.

While at the time she was influencing me in the ways of eating healthy (this was the 1960's) I was not amused by her throwing a slice of cantalope on my plate as a child. I did not like it, but I learned to recognize in time that the stage was set for healthy eating behaviours. Aunt Alice was one of the influencing factors in my life , she helped me to develop healthy eating habits.

RIP Aunt Alice!
Posted by Unknown at 11:21 PM No comments: Links to this post

Well, it has been over a month (barely) since I wrote and published the first cookbook entitled "Exploring Mexican Cusine: Abuelita's Kitchen. I have been working on that seems like forever.  I have begun the daunting task of marketing the book. In one months time I have sold over 60 copies. I am aiming to sell at least 500 copies this year and I know next to nothing about Advertising/Marketing a book.

So, here I beging the process of writing a Press Kit for submittals.

Sharon de los Santos announces the release and availability of her debut non-fiction cookbook, "Exploring Mexican Cuisine: Abuelita’s Kitchen" on December 10, 2009. It is available for sale at the local 102 Center retail store located in Ruidoso, NM, on her website identified below and on the Amazon website. The cost for a copy of the 8 x 10 paperback book is $11.95.

“Exploring Mexican Cuisine: Abuelita’s Kitchen”, is a cookbook based on one hundred year old family recipes from Mexico. She modified many recipes to be healthier, yet accessible for the modern American kitchen. This book includes "traditional Mexican dishes" as well as updated southwestern and Yucatan dishes like "Green Chile Chicken Tamales", "Pescado Vera Cruz" (Fish Vera Cruz style), and comfort food like "Arroz con Pollo" (Chicken and Rice), as well as traditional cookies "Polvorones".

From an early age, she loved cooking and realized that we all celebrate many important milestones in life in the kitchen of family and friends. She discovered as a teenager that she could write and her teachers and professors suggested she continue to write, from this point forward her love of writing blossomed along with her cooking skills.

I submitted for a copyright for the book, requested an LCN for libraries and bookstores and hope I crossed all the T's and dotted the "i"'s!
One more thing. When I was at my last Writers Meeting two weeks ago I was ripped open by a fellow member (who I might mention does not write) who laid into me for a "WRITING CHALLENGE" that is writing at too high of a level. If I do use 50 cent words it is simply because I write as I would speak. Please know, I am not not being a high falutin (is that a word??) ass-wipe.   I obviously tried to edit as I went from paragraph to paragragh and lost my focus...ugh.....

Also, I know now that I should not edit any of my writing until I have finished it!  Write first, edit later! 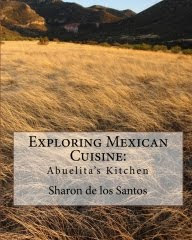 Posted by Unknown at 5:02 PM No comments: Links to this post

A little techinical magic has been done in the background. I've linked the feed for this blog to my web page located at http://www.abuelitaskitchen.com/ and my facebook page for ABUELITA's Kitchen.

I am compiling recipes for the second volume of Abuelitas Kitchen as well!  Any suggestions are appreciated and welcomed.

Sharon
Posted by Unknown at 10:17 PM No comments: Links to this post